The 16Switch is a two-zone, dual power supply, 16-port Gigabit Ethernet (GbE) device which has been optimised for music and video streaming. The 16Switch brings the proven benefits of the 8Switch to larger networks and features 2x independent rows of eight high-quality Gigabit Ethernet ports, which can be used as two independent eight-way switches or connected and used as one 16-way device.

The clock source is isolated for each network zone, allowing the TCXO modules to remove power-related noise from the switch circuit. Power is delivered by two independent isolated power supplies feeding each of the eight-port switch modules; the clean supply allows better network signal quality, ultimately driven by the highly accurate TCXO clock technology. When run as two independent power zones, it allows the performance-critical audio/video equipment to be run independently from the more noisy digital equipment also present on the network. 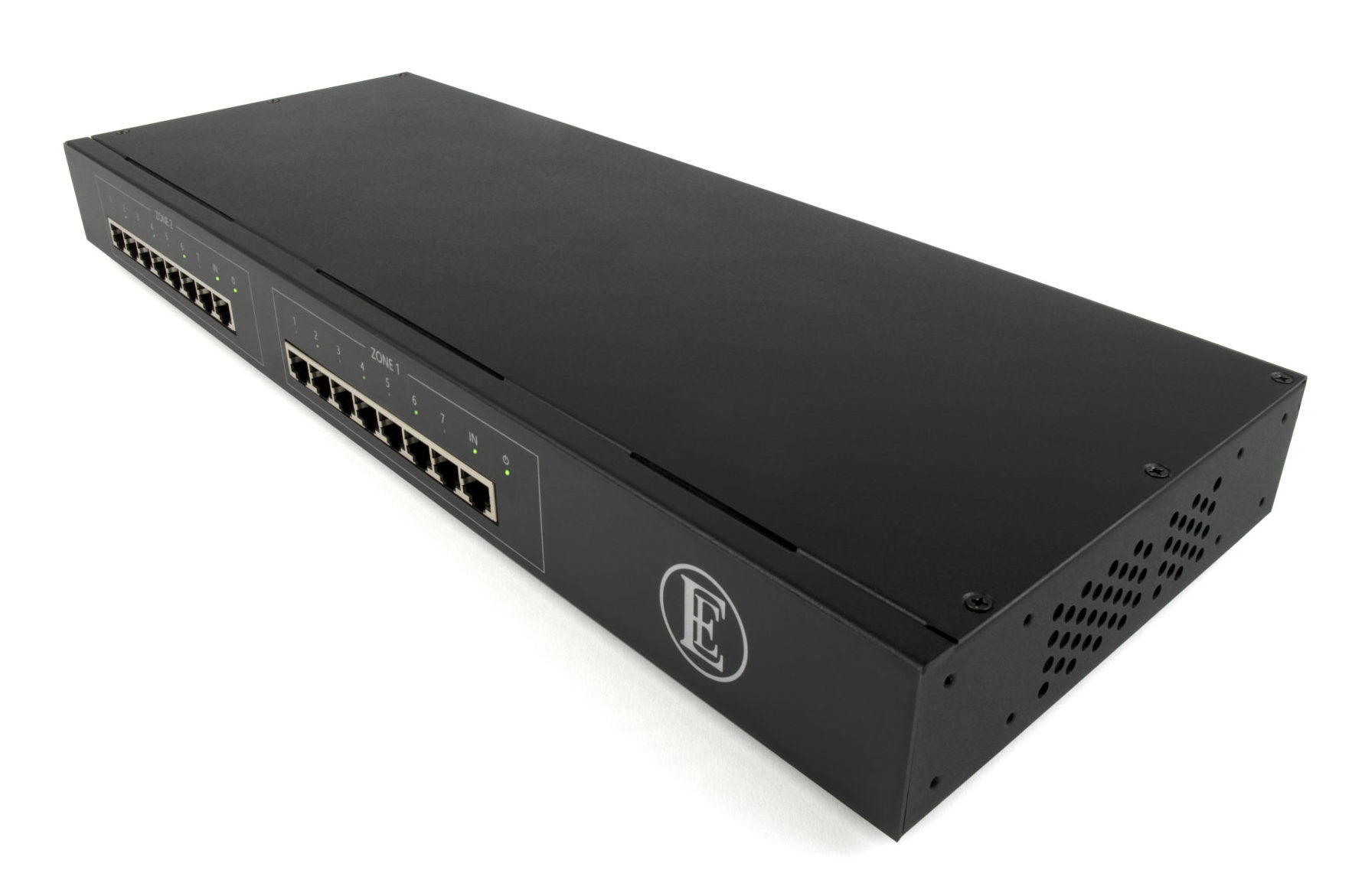 The 16Switch benefits from a high-quality 1U mild steel enclosure which offers protection from both acoustic and electrical noise. It is highly flexible and can be sited on any solid surface using the (optional) resonance-damping feet, to help decouple the device from unwanted mechanical vibration.

The 16Switch is also supplied with rack-mount brackets and bolts to allow mounting in a 19-inch rack (1U height). When rack-mounted, the case has both front and rear rack-mounting locations, allowing the sockets to be either forward- or rear-facing in the installation.

Find a dealer near you.

With data switches requiring high-speed power supplies, the use of linear power devices is negated, due to speed limitations. The 16Switch stays with this philosophy and each zone is powered by its own high-quality low-noise power supply. These advanced A/V-grade power supplies permit an optimum-quality network signal, with each zone being driven by high-accuracy clock technology which has been designed to reduce electrical noise from AC sources, and significantly reduce mains quality issues from affecting network signals. The 16Switch also boasts high power efficiency, a no-load power consumption of < 0.075 W, plus protection from short circuit, overload and over-voltages for each zone. 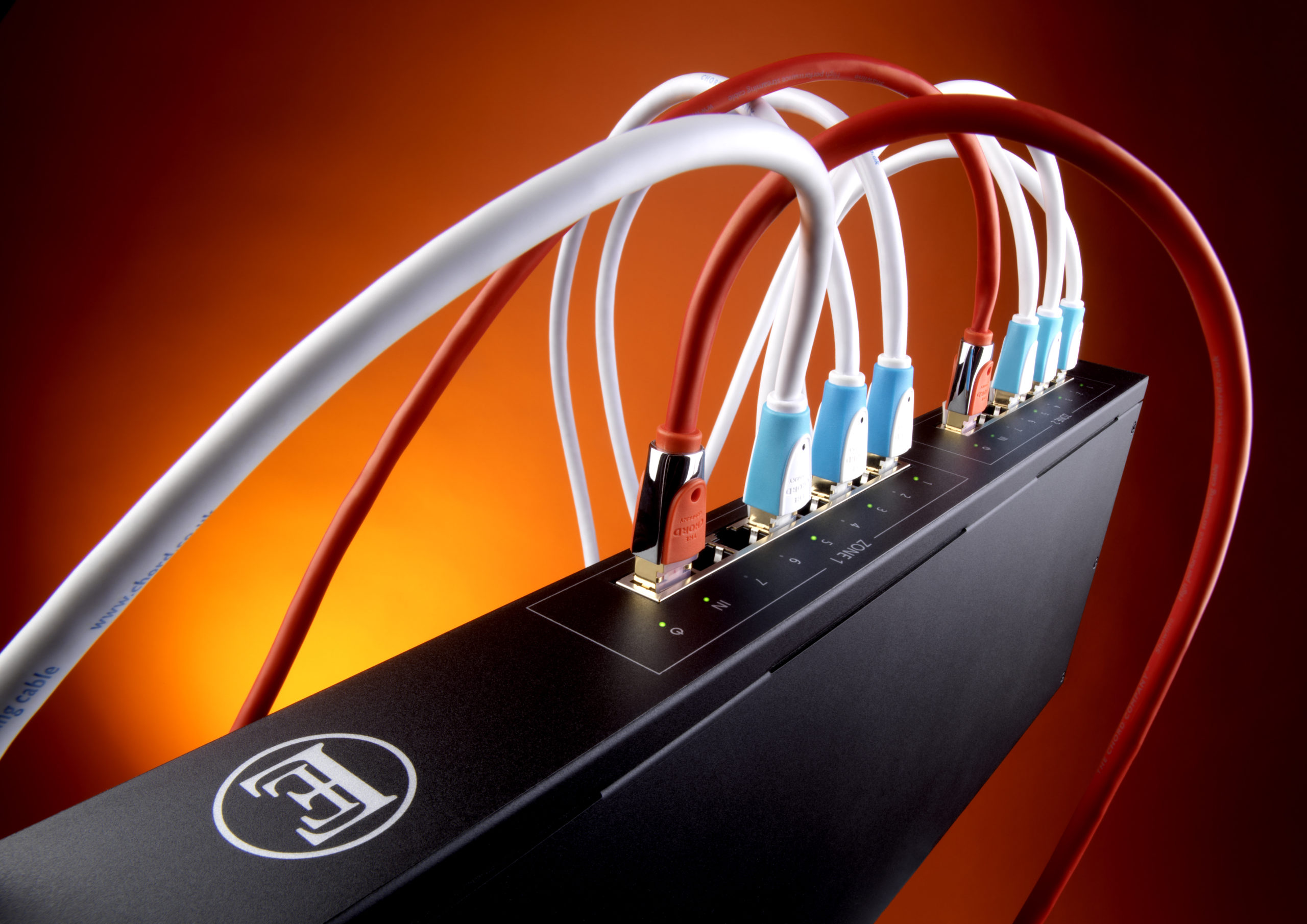 Listening to streamed music is not just about measurements and numbers.  We believe the 16Switch’s performance can surprise even the most hardened digital sceptic. The improved network signal quality can deliver significant benefits in music and video playback, whether streamed or via NAS drives.

The 16x 100/1000 Base-T Gigabit Ethernet ports make it possible to connect even the most demanding set-ups.

You can find out more about which cookies we are using or switch them off in settings.

This website uses cookies so that we can provide you with the best user experience possible. Cookie information is stored in your browser and performs functions such as recognising you when you return to our website and helping our team to understand which sections of the website you find most interesting and useful.

Strictly Necessary Cookie should be enabled at all times so that we can save your preferences for cookie settings. These cookies have a lifetime duration of 7 days.

If you disable this cookie, we will not be able to save your preferences. This means that every time you visit this website you will need to enable or disable cookies again.

This website uses Google Analytics to collect anonymous information such as the number of visitors to the site, and the most popular pages.

Google analytics cookies have an initial lifetime duration of 2 years.

Please enable Strictly Necessary Cookies first so that we can save your preferences!